GENEVA, Switzerland — Chances are that when it gets hot, you’ll be dipping in one of the many rivers or lakes in the area. But.. what about water quality and the dreaded “duck fleas”?

Here is what we know.

Water quality is measured monthly in Lake Geneva, while bacteriological tests are carried out every other week from May to October by both Swiss and French authorities (find the Geneva weekly results here). Unless otherwise noted through the media or townships – most lake water is considered safe.

Finding a beach near you

In a regular season, there are between 112-115 beaches approved for swimming including 14 in canton Geneva. Download / open the 2015 brochure for beaches or download the App here for the latest beach info.

In general, canton Geneva discourages people from swimming in its rivers as they do not meet the “high ecological standards” set up in the German-speaking cantons. Nevertheless, the city has built piers and improved access to both the Arve and Rhone rivers.

Beaches around these rivers—and there are more than 300km to explore around the canton—are also open to dogs. Most humans however, dip in the Rhone river starting after the quai de Sujet near la Jonction (see photo below). 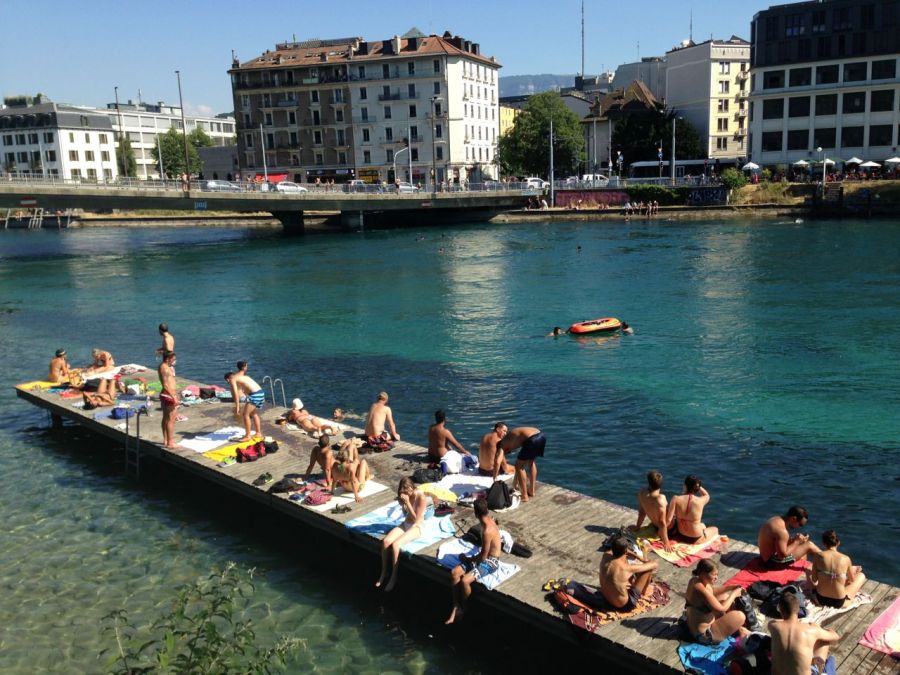 Those pesky “duck fleas” (not really “fleas” but rather parasitic larvae) that produce the Cercarial dermatitis or swimmer’s itch, are mostly found in warm (20C), shallow waters, surrounded by vegetation.

To avoid them, it is recommended to swim in colder, deeper waters. To avoid itching, shower after swimming, or dry off vigorously with a towel to remove possible offenders.

Memorize these phone numbers and use them in case of an emergency — in Switzerland and France you will need to call these numbers to get the proper authorities to respond:

If you would rather swim in one of the many chlorine-sanitized pools in the area, find a listing I prepared for GenevaLunch which contains all indoor and outdoor pools.