GENEVA — US President Donald Trump’s executive order to ban travelers from seven Muslim-majority nations from entering the country, has sparked a global backlash including from neutral Switzerland which stated that such ban is “contrary” to the Geneva Conventions.

“As far as refugees are concerned, all countries must take in victims of war for humanitarian reasons under the Geneva Conventions. It is contrary to the Conventions to impose a general ban on entry for people coming from Syria,” said Swiss Minister of Foreign Affairs, Didier Burkhalter in a statement. The US is one of the original signatories of the Convention.

While the Geneva Conventions’ rules apply in times of armed conflict, they also seek “to protect people who are not or are no longer taking part in hostilities”.

“It is clear that these conditions have immediate consequences for many people around the world – including people in Switzerland – in particular those with a dual nationality,” said Burkhalter. “We are in contact with the US authorities in order to obtain as clear information as possible on the procedures envisaged and we reserve the right to take appropriate measures to protect the rights of Swiss citizens concerned.”

Switzerland said it is committed to preventing terrorism but that “any measures taken in that regard must, however, respect fundamental rights as well as international law. We have always opposed discrimination against human beings based on their religion or their origin. In this respect, the executive order issued by the US government is clearly a step in the wrong direction,” said the Swiss.

US conservatives, see the global backlash as merely an inconvenient. “The law explicitly says the president can exclude any person or class of people he wants,” said Mark Krikorian, Director of the Center for Immigration Studies to Reuters.

While the usually neutral Swiss have openly criticized the measure taken by the US government, it also faces a growing hate movement at home.

Right-wing efforts to curtail  the “facilitated naturalization” of so-called “young third-generation foreigners” (who are not really foreigners at all), have been vitriolic at best.

The Swiss-born grandchildren of immigrants are now the target of a xenophobic anti-Muslim UDC/SVP campaign  that asserts that while “those of Italian ancestry would have no problem assimilating to Swiss culture”, another “20 per cent would be Muslim […] coming from countries whose culture and, above all, religion, would prevent them from integrating into their communities, thus encouraging more and more Muslims to reject our way of life and even our legal system.”

The campaign falsely argues that such facilitated process would be poorly vetted and would quickly get “out of control”. 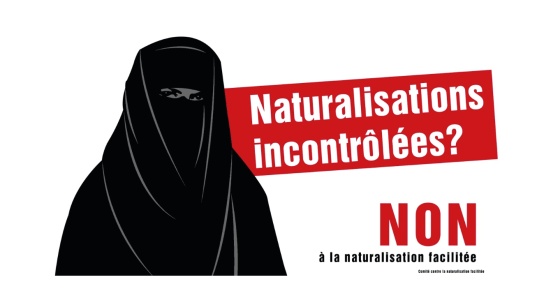 The Swiss Federal Council is urging voters to approve the initiative in favor of facilitated naturalization for those born here of Swiss-born parents. [The proposal does not grant automatic naturalization as they will still have to apply for citizenship before turning 25 to benefit of this measure.]

Burkhalter has said that those who have been born here, gone to school here and have spent their young lives here are indeed Swiss even if the passport says otherwise. On behalf of the Federal Council, Burkhalter has called on voters to approve the initiative to be voted on 12 February.